Unique and full of life

The home has been decorated with practicality in mind but with great feeling. According to the motto, signs of life and patina are allowed, and there’s no need to sweat the small stuff.

Fifteen years ago, we left the urban jungle of the capital city behind and relocated to the countryside. We decided to fulfil our dream of a wooden house with a garden in the middle of clean nature. We could still pop into the city for some fun when we fancied.

We wanted our home to reflect what we had seen and experienced. Over the years, our style had been influenced by work and holiday trips abroad among different cultures. We were especially impressed with the Andalusian earthy style, wooden architecture on the east coast of the United States, the flair with which Danes blend old, new and self-made pieces, and we’ve even added a dash of rugged, rustic French style.

We were after a home that would tantalise all the senses. Our decisions were limited to a budget, but we weren’t ready to compromise on every aspect, such as the flooring; as one of the most prominent and solid elements in a home, it pretty much sets the scene.

We knew we wanted fairly dark floorboards. We closed our ears to any other options despite the seller’s best attempts to convince us how practical they would be with dogs in the house. But other materials would simply not age as beautifully and receive a lovely, soft patina with each passing year. If sandblasted timber floors would have been on offer at the time, we would have gone for them. But we trusted that our relaxed lifestyle would bring the right amount of wear over time. We wanted to add floorboards throughout the home, including the kitchen. The only areas that were tiled were the mud room, wet areas and utility room.

Our constructor showed us an example of Timberwise oil-waxed Siberian Larch plank parquet in the colour cognac. It was love at first sight! In addition to looks, our decision was sealed by the fact that it was made in Finland with ecological production methods – no toxic adhesives released into indoor air. We suffer from allergies and know what surfaces with adhesives can cause. Our floor is also where our prey-driven dachshunds get to play, and there was no way we wanted the floor to cause havoc to their sense of smell. 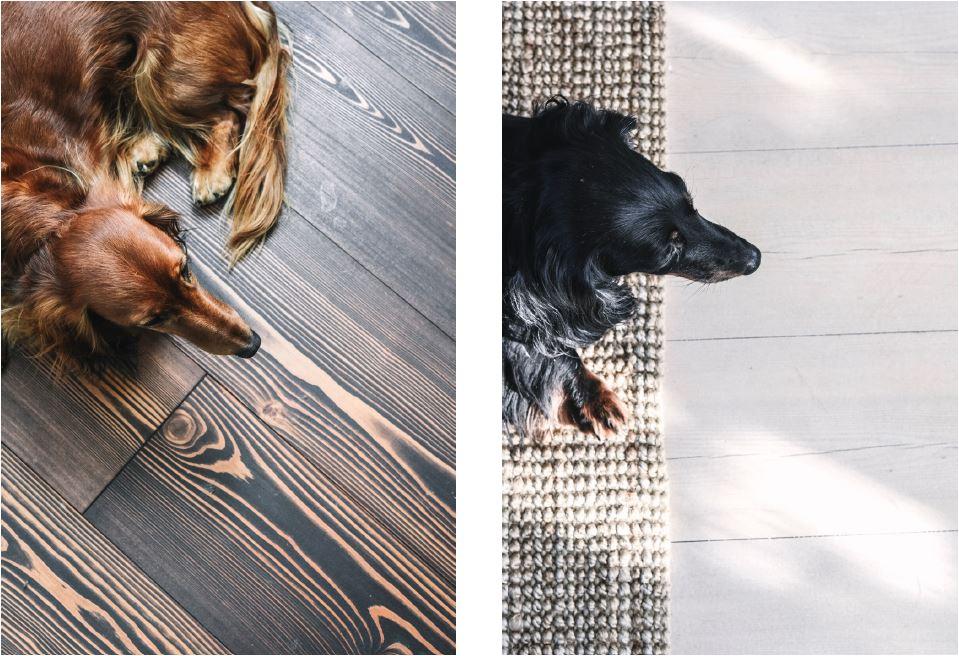 The construction was completed. We made ourselves at home and led a carefree existence for more than a decade. Even the number of dogs quadrupled from two to eight. We would march straight inside with our shoes on, gravel would end up inside and leave its imprints on the floor under the jute rugs, and dogs running in circles scratched the floor. We mainly treated the floor by vacuuming and washing. We didn’t open the tin of wax once in the first decade. The floor received exactly the type of wear we were after, although a little too much in some areas perhaps.

When the kitchen began to look a little worse for wear, we decided to start renovating one area at a time. It made sense to renew the floor at the same time, as our taste and style had evolved towards a paler feel over the years. Sanding and lightening the floor with Osmo Color wax oil worked wonders. The result was fresh, light, vibrant and modern. We opted for a translucent white shade that still revealed some woodgrain and patina. Sanding and filling got rid of the deepest grooves, while the rest remained testament of a life well lived. After going for a lighter colour, we’ve also taken more care of the floor, as any dirt can be seen more easily than before. Since the update two years ago, we recently added another layer of wax. The rest of the rooms that still have dark flooring are next in line for an overhaul.

Over the years, our house has become a warm and cosy home for us and an easy-going place for our friends to get together. The sound of laughter fills the place, and at weekends we often socialise long into the night. Our home is decorated with feeling and is full of life, and like its owners has a bohemian flair.