Interior trends change over the years, and naturally the same goes for flooring. During the two decades of Timberwise’s operations, changes have applied to wood types, surface treatments and the variety of shades on offer.

In Timberwise’s early days, different countries had their own wooden flooring trends. It’s when Timberwise focused on coniferous trees, such as Siberian larch and Finnish pine and spruce. In addition to 1-strip floorboards, called Natur Holzboden or “manor flooring” at the time, the range also included 2 and 3-strip products. The products being a single strip from beginning to end made them distinct from other traditional strip parquet on offer at the time.

In the beginning, truckloads of larch flooring were transported to Italy, Switzerland and Germany. Italians were the most daring in their use of materials, coming up with novel ideas such as the Eben black larch flooring manufactured for Moschino fashion house. Germany and Switzerland were more restrained, favouring only wood-coloured flooring or a slightly lighter version of larch.

Pine was exported by truck to Denmark and container to Japan. Deliveries to Japan mostly included wood-coloured pine in a specific 1818 mm Tatami length despite every effort to explain that the next row would begin with the previous piece, so the ordered length did not actually matter. Danes had a distinct preference for traditional lye-treated, white wax-oiled pine.

Used to knotty plank flooring, Finns favoured spruce. They would opt for both wood-coloured and white wax-oiled products depending on the site. Unfortunately, few consumers realized that spruce was the softest type of wood, which posed problems with follow-up treatment. This coupled with dwindling demand led to spruce being the first type of wood to be discontinued in the Timberwise range. The market was clearly segmented according to wood type between 1999 and 2003.

Timberwise’s market area continued to expand, and a demand for hardwood and dark shades arose next. Timberwise addressed the demand by including dark, exotic, hard Merbau in its range, followed by Jatoba and Iroko. Ash and maple were examples of pale hardwood added to the selection. Also oak entered the scene at this stage – signs were already in the air of its future reign between 2004 and 2006. Since then, oak has been king of hardwood flooring all over the world.

As exotic wood and logging certification could no longer be completely trusted, Timberwise decided to exclude them entirely from its range for environmental and sustainability reasons. It made Timberwise a pioneer and first manufacturer to abandon exotic woods already in spring 2007. The decision paved the way for the company’s area of specialization in the coming years – diverse colour treatments. As Timberwise still wanted to serve its customers who were after dark flooring, as was the trend at the time, the company began to specialize in colour treatments for sustainably grown oak. As a result, Timberwise began to stand out from competition and became known for its wide range of shades on offer.

In the case of pale hardwood, maple was gradually discontinued due to its poor resistance to under-floor heating, a priority for wooden flooring especially in Finnish and Scandinavian conditions. The remaining types – larch and pine in the case of coniferous wood and oak and ash in the case of hardwood – had become established in the Timberwise product range. Timberwise continued to specialize in colour treatments, with oak taking the lead. By now, also distinctions between different countries had disappeared. Oak was sold all over the world and became the main product in every market area.

The reign of oak was partly influenced by a strong influx of Chinese low priced oak parquet onto the market. At the same time the dark flooring begun to disappear along with an increased demand for pale and white products. It was the beginning of a period of “white floors”, which was evident in both wooden flooring and interiors on the whole. In addition to Arctic, also Snow White, Antarctis and lastly opaque Polar were added to the Timberwise product range. The dominion of white and pale flooring lasted for several years, from 2008 to 2012, until customers became interested in more natural, but greyish tones. A grey wash became a contender to white tones.

So-called candy colours appeared alongside white tones. Investing in a spray line in 2009 meant Timberwise could in principle manufacture any tone it wanted. A little later, shocking candy colours including Pink, Baby Blue and Sunshine Yellow were launched on the market. Especially bright pink flooring caused a stir, leaving nobody cold – people would either love it or hate it. With its candy colours, Timberwise wanted to show that in addition to flooring, the product could be used as wall covering too, if laying a yellow or pink floor felt too much. The products were also used to manufacture vibrant children’s furniture; candy colours were appealing to families with children with more daring tastes. Timberwise was also able to prove it could execute customized tones for projects and consumers. It manufactured green flooring for a consumer client based on the provided colour code, white flooring in a specific tone and gloss effect for a hotel, while a designer commissioned a “fitted rag rug” from bright-coloured floorboards. The sky and imagination became the limit for colour options.

The reign of grey flooring began to wipe out the whitest shades, and the Grey and Levi shades became clear favourites in the Timberwise product range. They both had a cool tone but still revealing the natural colour of wood. They were accompanied by opaque greys like Husky and Silver, which addressed customer needs for shades of grey with more coverage. Dominating for several years, greys were easy to combine with a wide palette of colours and styles. The shades were mainly calm and harmonious, which increased the duration of their appeal. Naturally, Timberwise also offered stronger tones for more daring tastes, such as Ferro and Ylläs. Grey flooring was at the height of its popularity from around 2013 to 2016.

Around the same time with grey flooring, design tiles and wide floorboards became popular. Herringbone was the first product in the Design Floor range, with a wider plank and pattern than customary. Continuing to experience a strong and steady rise, patterned flooring is sold at considerable volumes all over the world. Timberwise addressed a demand for increasingly wide planks by including special order 222 mm and 260 mm oak floorboards in its range, which were widened to 230 mm and 270 mm a little later. The wide floorboards have been part of the range ever since.

Following its Herringbone flooring, Timberwise invited top Finnish designer Harri Koskinen to design floor patterns that would both look stunning and have a positive impact on reducing production waste. Smaller-patterned flooring could make use of short and narrow materials left over from manufacturing long planks. To manufacture its Design Floor range, Timberwise once again invested in machinery, acquiring a CNC machine for its Loimaa factory in 2017. Since its arrival, the CNC machine has been in constant use two shifts a day, which is an indication of the huge popularity of the Design Floor range.

In the last few years, greys have gradually been forced to give way to natural tones craved by the market and decorators. The need has been for a slightly paler version of the natural tone of wood, reminiscent of the look of when it is freshly cut. Although there has been a demand for untinted flooring, Nordic, Snöhetta and Sky White, all pale and slightly whitened products, have been the top favourites. Also the reign of oak seems to finally be shifting with especially design professionals seeking other options, evident in a definite rise in the volume of larch and ash. Larch Cotton and white wax-oiled Ash have spiked in sales figures. To this day, natural, pale shades have been popular since they were on display at the Seinäjoki Housing Fair in 2016. The shades were used in over half of Timberwise sites at the Pori Housing Fair in 2018.

Following the period of whites, blacks and greys, the last few years have seen moodier interiors with a stronger use of colour. Muted, dark tones ranging from blue to green, ochre, yellow and red have been on display around the world including the Milan and Stockholm interior fairs as well as at the 2019 Kouvola Housing Fair and Habitare Fair in Finland. An increased use of colour is also evident in flooring trends accentuated by different shades of brown and a demand for even darker shades. The circle seems to close every twenty years, and it is highly likely that floor trends will be returning to increasingly dark products.

Timberwise eagerly follows and develops floor trends, always striving to stay on top of the wave. 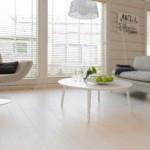 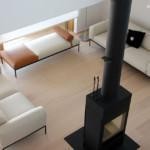